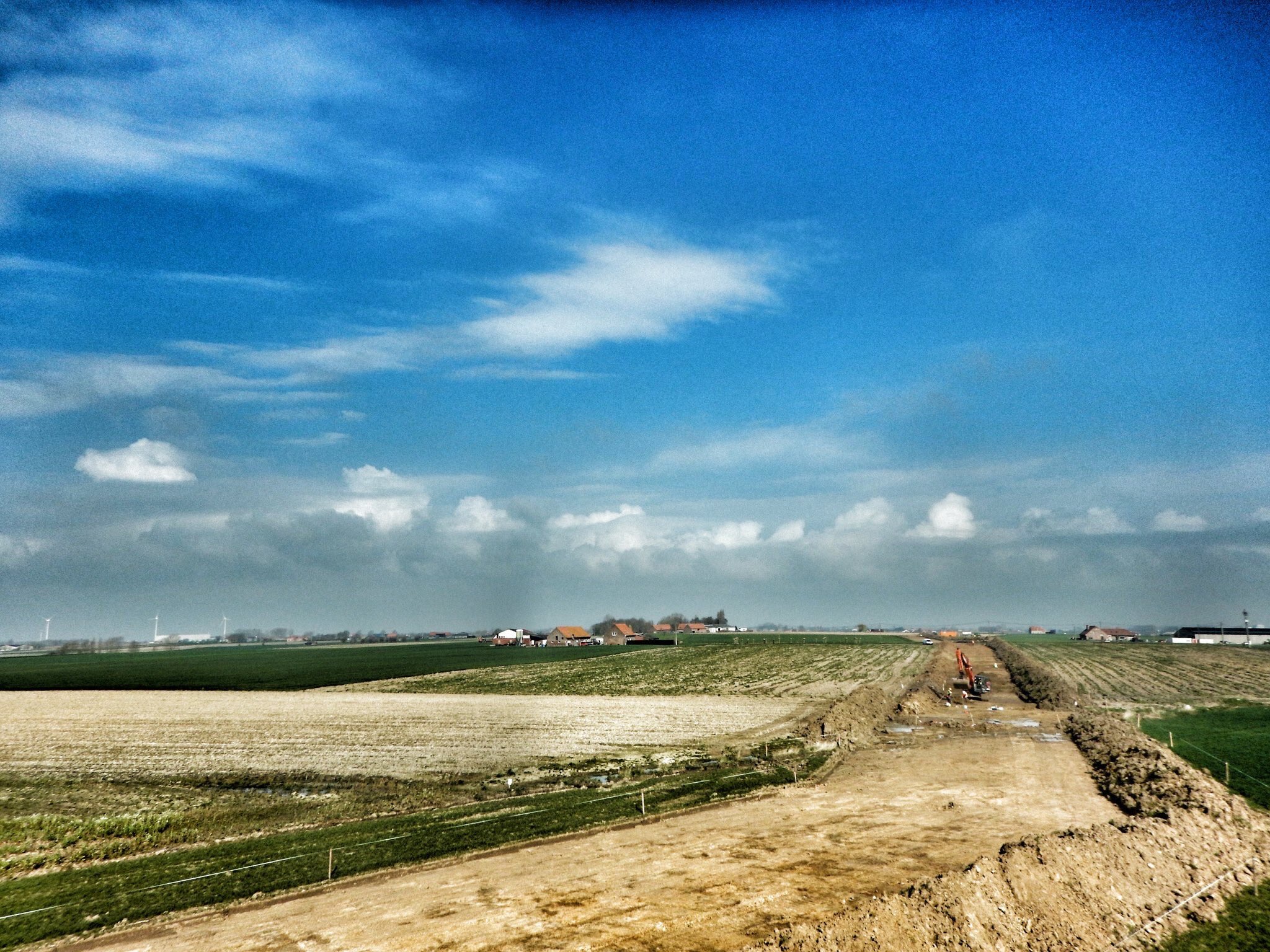 Have you joined the Great War Group yet? If not, where have you been!

Today, we’re offering you a free peek at the contents of our fantastic magazine, Salient Points. Each quarter Belgian archaeologist Simon Verdegem contributes his “Field Notes,” sharing stories of his work on the Western Front. In this piece, he shares the amazing story of Captain Henry John Innes Walker: 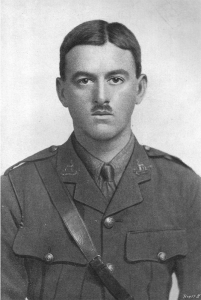 “Why are they stopping?”, a young British staff officer wondered. “Because they’re all dead!”, was the answer he received. From their observation post at Mouse Trap Farm they overlooked the battlefield, where the Germans had taken out more than two thousand British professional soldiers in just twenty minutes. It was Sunday 25th April 1915, around 7 am. An hour earlier, the British 10th Brigade was still marching on the road from St Jean to St Julien. They were rushed up from the southern part of the Ypres Salient to help stop the German advance.

The orders were to march from the road to their objective, Kitchener’s Wood and St. Julien. The 1st Battalion of the Royal Warwickshire Regiment formed the left flank of the attack. A few minutes before 6.30, they left the road in a closed column and headed north over the fields, against a slight slope. In the twilight, some farm buildings (Oblong Farm) stood out against the horizon at the top of the hill. There was no time to send scouts ahead and as a result the terrain was completely unknown to them. According to the orders they had to advance until they reached the farm, where they had to switch to battle formation. Behind the hilltop was Kitchener’s Wood, their final target.

About 101 years later, a large-scale archaeological survey began on the Fluxys gas pipeline route. This pipeline cuts through the fields over which the Warwickshires advanced on their way to the the assembly point near Oblong Farm. On this five hundred metre long strip, no wider than thirteen metres, the archaeologists found mortal remains of fifteen soldiers of whom ten were identified as British, one as German and four whose nationality remained undetermined. At first it was not clear how and when these soldiers had come to an end. The pre-war production dates of the .303 cartridges found with five of the ten British soldiers pointed to the beginning of the war. Clarity came during the investigation of a large bomb crater in the middle of this area containing the bodies of two soldiers. Not only were these remains complete, the soldiers were also in possession of all of their equipment. The badges of the Royal Warwickshire Regiment were still attached to their caps.

That Sunday morning in 1915, when the Warwickshires were approaching Oblong Farm, all hell suddenly broke loose. A deadly barrage of rifle and machine gun fire from the farm buildings and the immediate surroundings fell upon the closed ranks of the advancing troops. Under cover of darkness, German units had been assembled from behind Kitchener’s Wood to take up positions on the crest. Unaware and unprepared, the British regulars walked straight into the German positions. Despite the deadly machine gun fire, their response was extremely calm and professional. The column immediately fell apart in battle formation and they stormed the German positions. However, the situation was hopeless. A Canadian soldier witnessing the slaughter, had never seen a similar massacre: “I can still see before me how they were lined up in a long line when the German machine guns opened fire. It was pitiful how they were just mowed down.” No less than seventeen officers and five hundred other ranks were killed, wounded or went missing.

During the examination of the bodies in the bomb crater, it soon became clear that the chances of identification were greater than normal. One of them turned out to be an officer. This could be determined by his uniform buttons and collar badges. In addition to his military equipment, such as a wire cutter and a canteen, he also had several personal belongings: a wallet, a whistle, a pocket knife and binoculars. Inside the wallet was a silver medallion with the initials “H.J.I.W.”. These initials matched only one of the officers, Captain Henry John Innes Walker. Confirmation came when the same initials appeared from under the mud on the lid of the leather binoculars case, and also when age and height were found to match those of the missing officer.

Henry Walker was born on 12th February 1890 in Remuera, New Zealand. He went to school at King’s College in Auckland and was a prominent athlete who excelled in rugby and running. At the age of 18 he left school and prepared for the army. Two years later he received his commission as Second Lieutenant and left for India on 15th March 1911, where he joined the 1st Battalion Royal Warwickshires. Throughout his army career Walker remained a successful athlete. When he moved with his unit to the United Kingdom, he promptly received the offer to play for the famous Blackheath Club. Walker was also very successful in competitions within the army and just before the outbreak of the war he gave the Warwickshires, in which he had been promoted to lieutenant, the title in the regimental championships.

On 23rd August 1914, Walker arrived in France with the battalion as part of the British 4th Division. He came into action for the first time along the Belgian border, where he went missing on 26th August. This news reached his parents on 9th September 1914. A few days later, however, it was reported that he had safely returned to his unit. Apparently he was isolated during a battle when he had left the trenches with his colonel and three hundred soldiers. They got stuck in a traffic jam and when he came back after he took off on his own to assess the situation, everyone had disappeared. Eventually he found some artillerymen who gave him a lift so he could rejoin his unit. Walker spent his first winter in the trenches in the Ploegsteert region, where he actively participated in the famous Christmas celebrations. On Christmas Eve, the approaches were still timid and cautious, but everything went without incident. At midnight, Walker finally jumped on the edge of the trench and shouted: “Long live the King”, after which his men deployed God Save the King. The next morning, he witnessed meetings in the no man’s land and, according to his letters home, he even saw German and British troops having a kickabout with an old cap.

A few months later, another telegram arrived at his parents’ house in Remuera. This time, however, no respite followed. Captain Walker went missing on 25th April 1915 during the counter-attack towards Kitchener’s Wood. Eyewitness reports on the circumstances of his death varied greatly. On one matter, however, there was unanimity and that was that he fearlessly led his men in the direction of the German lines and encouraged them with his revolver in hand with the words: “Come on, lads!”. He was hit when he jumped out of a bomb crater. About how that happened, the reports are less clear. Some say a bullet hit him in the head, others report him to be hit by several round in the abdomen. The only certainty is that he was still in that bomb crater when the archaeologists found him. Henry Walker died on 25th April 1915 around 7am as a New Zealander in the British army. Ironically, almost exactly when his countrymen landed on the beaches of Gallipoli. 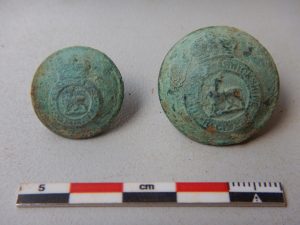 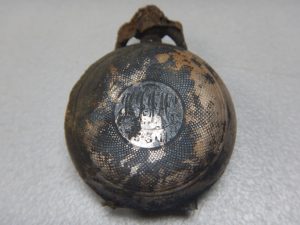 Joining the Great War Group as a full member ensures your delivery of four magazines in excess of 100 pages each year. In addition you will also receives discounts, benefits and invitations to our education and social events. You can join here: